This article is a stub. You can help Japanese Language Wiki by expanding it.

Hiragana (平仮名 or ひらがな) is one of three Japanese syllabary, a component of the Japanese writing system along with Katakana, Kanji, and Romaji. It contains 48 characters. Hiragana and katakana are both kana systems, with the rule that each character represents one mora. Additionally, each kana is either a vowel such as "a" (あ) or a consonant followed by a vowel such as "ka" (か), or "n" (ん).

Hiragana is used for words that have no kanji attached to them, which includes particles such as kara から (meaning "from"), and suffixes such as -san さん. Hiragana is also used in situations where the reader or author does not know the particular kanji for the word, like hiragana is used in preschool and children's books, also a situation where it would be considered too formal for the writing purpose. Adjective and verb inflections (altering a word) are written in hiragana, in this case part of the root is then written in kanji. Hiragana is also commonly used to provide a reading aid in the pronunciation of Kanji, which is called Furigana. There are hiragana characters for wi and we although they aren't used frequently:: ゐ (wi) and ゑ (we).

The romaji of these hiragana symbols are written closer to the English pronunciation.

Ye is an obselete kana. It has been encoded into Unicode.

を can be sometimes wo but more often used as 'o' 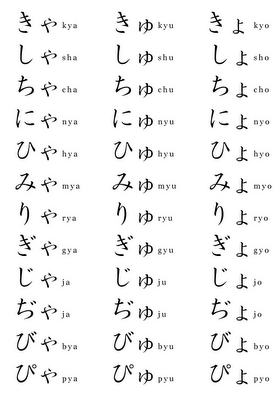 A chart showing the yōon (digraphs).